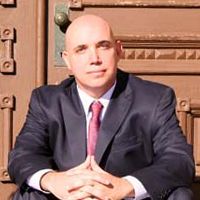 Over his career, Mr. Trumpler has completed more than 100 jury trials. He concentrates his practice in defending people accused of crimes throughout Central Texas. Mr. Trumpler has offices in Austin, Texas and Round Rock, Texas for your convenience.

Additionally, Mr. Trumpler is a proud veteran of the United States Army. He received his Honorable Discharge in April of 2003. He served his country from 1996 to 1997 as a peace keeper in the former Yugoslavian Republic of Bosnia. In his spare time, he enjoys spending time with his four sons, reading, and traveling.

Over his career, Mr. Trumpler has completed more than 100 jury trials.

Mr. Trumpler was originally licensed in California in 2000 (Bar # 210564). Mr. Trumpler has been licensed to practice law in the State of Texas (Bar # 24053913) since 2006. He has also been admitted to practice before the United States District Court in:

Mr. Trumpler is the managing director and managing attorney at The Law Offices of Jason Trumpler. He works on a variety of cases, including criminal defense and DWI. To speak with Mr. Trumpler or a member of our team, contact our office online or call (512) 457-5200 to schedule a consultation today.